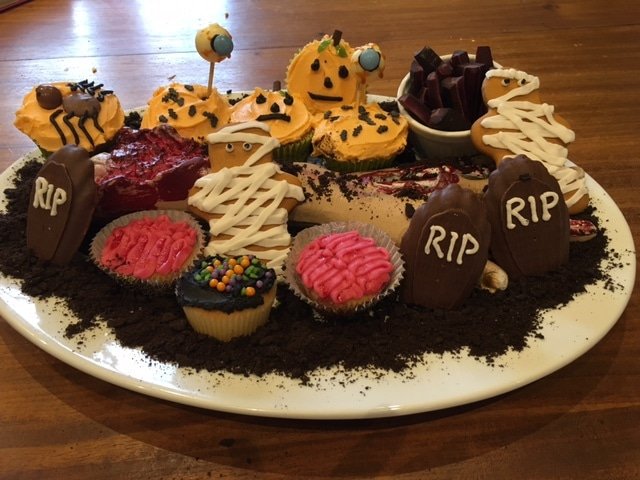 Halloween in its glorious present form is a relative recent addition to British culture borrowed from across the pond.In my childhood Halloween didn't feature at all.We didn't go trick or treating and my parents definitely didn't beckon the neighbourhood youth to their door with a Halloween light at the window and Tupperware brimming with treats.We were lucky to get a Caramac at the weekend to be honest.But once at secondary school my best friend and I were torn in equal measures between tales of Simon Le Bon, John Taylor and Nick Rhodes (the other two were a bit boring) and tales of all that was spooky and supernatural.We couldn't get enough.

Our favourite tale was a local legend about a wonderful ghoulish horseman called One Handed Boughton, he was one handed after an unfortunate sword fight (you don't say). His kin had owned the family seat, Lawford  Hall and when he was alive he would terrorise the local villagers by careering around the lanes in his coach pulled by six grey horses, narrowly missing little Bob on his way to the Mill.The terror continued however when after his death he still continued his boy racing, resplendent in red coat and breeches, his six horses,manes flying,as they dashed irresponsibly around the local area.

These ghostly apparitions were said to be more likely on All Hallows' Eve - cue slightly hysterical teenagers crammed into a steamed up Fiesta sitting outside the old family home,now a hotel, terrified right down to their turned up chinos, stripy tops and chunky lace ups-and we were not alone, several other cars were parked around us - that is unless we had stumbled across.................?.

Hearts thumping out of our chests we sat there and waited.......and waited.......but alas or thank God One Handed Boughton appeared to have stage fright and we never got to meet the cavalier coachman personally .Not that that wavered in our belief in said spectre, he must have been busy  washing his wheels or the moon wasn't in the right ascension obviously.

We were stalwart and or stupid and returned in subsequent years, again to no avail (fancy that). I hear the legend lives on and cars still park in that lane on Halloween, probably full of similar gullible teenagers either that or do....s???

Anyways my children are young and so Halloween to them is safe but scary, more rabid pumpkins than ouji boards. Its about screaming with their friends and collecting as many sweets and chocolates as is humanly possible-childhood bliss-probably morally and nutritionally very flawed but I'm not above raiding their buckets once they're fast asleep either, their hands clasped in sticky repose.

The other huge bonus for me is the Halloween tea party before the off. I assure its annual appearance, not only to establish a family tradition but because I simply love Snot Jelly, White Chocolate Eye Balls, Brain Cakes, Dead Men's Fingers and Sausage Mummies. Unbridled tacky enjoyment. But I am about as ham fisted as they come so simple assembly jobs are a must.Think cooking by numbers.

Pizza Hands are just cut out of cheese and tomato pizzas using my hand as a template.

Ghost meringues are usual meringue recipe but scaled down for 6 ghosts here with 2 egg whites but you can scale up or down to suit using 50g caster sugar for each egg white.Then blob on eyes using black icing(I buy a pot of the stuff already made)

Sausage Mummies are simply chipolatas wrapped in thin strips of bought puff pastry pre rolled.Wrap the strips round tightly (leave space for eyes)and make sure joins are on the bottom when baked.Brush with egg wash,bake and when cooled or a little warm make eyes with black icing.

Spooky cup cakes.I make cupcakes or buy them and buy a pot of orange frosting.I cover them all then decorate individually:-

Pumpkins-I used a knife to make downward stripes.Then piped/blobbed on eyes,nose and mouth.Used a piece of chocolate matchmaker for stem and bought writing icing tubes and used a green one for leaves.See heading photo.

Brains-I used pre bought pink icing to cover half the fairy cake with a continuous snake leaving no gaps and then repeated on the other half.I then gently brushed with jam(make sure it's thin so as not to squash the icing)See heading photo.

Spiders-I used a large chocolate body for body and a Malteser for the head.Then piped on eight black legs.

White chocolate eyeballs-I used Lindt white chocolates and used black icing to fix a blue Smartie onto it.I then used red writing icing in a tube to pipe on red capillaries.I used wooden skewers to stick into some of the cupcakes.See heading photo.

I always like to do a statement cake but again it's got to be easy peasy and this is.I discovered it last year on YouTube and it worked a dream.Have a look on you tube there are lots on there.

This is a stunner of a cake and the centre piece of a Halloween Table. It is very simple to make. The children could even help you make it.