This very simple but seriously delicious Ice Cream Birthday Cake is something I made for my Son's Birthday this week. He adores Ice Cream and was sooo excited when he knew that I was planning to make it. I got just as much pleasure from that as I did eating these fabulous and moreish frozen, swirly wedges of vanilla ice cream, caramel and nobbly chocolate bits. You've gotta love the retro maltesers too..... 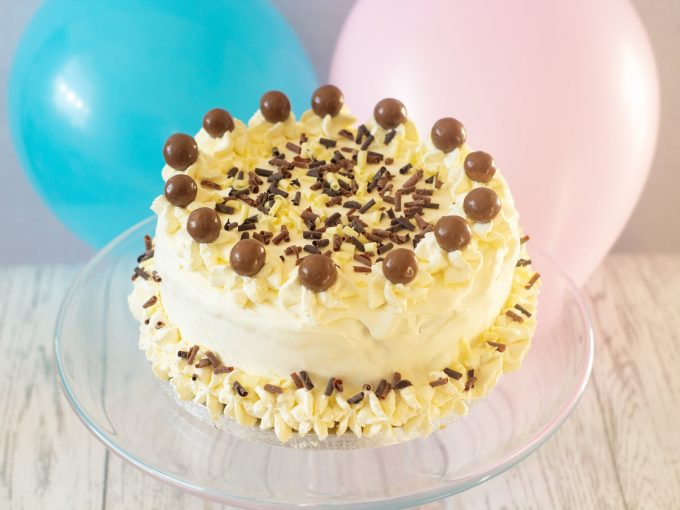 Every year this week brings me almost comparable amounts of joy and pain. It is a week of 3 birthdays for me and a whirlwind of puffing up balloons and running out of bas.tard selloptape.

By the end of it all I am good for nothing. To add to the pain this January has not very kindly brought with it my 47th year. In other words I'm feeling really old.

This Ice Cream Cake has afforded me some respite in the cake making factory that my kitchen inevitably becomes for this week every year.

It is so much easier to make than a standard fancy pants sponge creation or at least it feels like it is. Largely because you can make it a month ahead and then not touch it again until a few hours before it's required.

I decorate it in this retro fashion because I had a bit of a vision and am more than a bit rubbish at foofing and this is pretty easy foofing. Basic piping skills are all that's required here however go as fabulous as you can.

But relax, you don't even have to pipe or cover with sweetened cream you could simply drizzle over chocolate and toffee sauces and then load with chocolate whatevers.

This is an Ice Cream Cake of the simplest variety. The sheer novelty of it too carries big bonus points. There will be ooooh's and ahhh's comparable to an extremely technical creation of four tiers and caramel baskets. You're already the best Mum/friend before anyone's even taken a bite.....Wallop.

You can use whatever ice cream is preferable to your loved one. My son is vanilla all the way so it was a no brainer for me.

I chose a pre bought caramel sauce for easy peasiness and bourbon biscuits because they too are a favourite. You could add just about anything in reality.

I also chose to "ice" it with sweetened cream because I wanted to replicate a cake look. It was very simple to do and just like icing a normal cake.

I chose to put the remaining cream in a piping bag and pipe on some cream rosettes. I was desperate to go for the retro look and  put maltesers on the top nestled in frozen cream swirls.

It came to me at 8 pm one night, need I say more. But there it was in my brain and I could do nothing to change my vision for this cake. But you really don't have to.

You could just leave the thing naked and drizzle with toffee or chocolate sauce for the big reveal.

You need to begin this cake the day before. It can sit in it's tin for a week no problem but once out of it's wrapping and naked you need to serve it in a few hours.Be careful when closing the cling film flaps over the ice cream in the tin. If the cling film sits into the ice cream it will be more difficult to peel off when frozen.Use a few more pieces if your cling film/plastic wrap is weak.You can make this ice cream cake up to a month before you require it. Simply decorate a few hours before you are going to serve.Make sure your ice cream isn't soft serve!Use any ice cream flavours that you fancy and any biscuits, chocolates, fudge pieces that are favourites.Any nutritional information is approximate and intended only as a guide.

Keyword Ice Cream, Ice Cream Birthday Cake, ice cream cake
Tried this recipe?Take a pic and tag @applytofaceblog on Instagram. I would so love to see them!

Fiesta Friday hosted by  Antonia @ Zoale.com and Julianna @ Foodie on Board