This Cinnamon Rolls recipe is incredible. Every single time I make them my knees go weak. The smell of them baking in a home is enough to conjure Santa himself, sitting on your sofa, drinking Hot Chocolate with sprinkles, whilst Rudolph is  asleep on the back door mat. 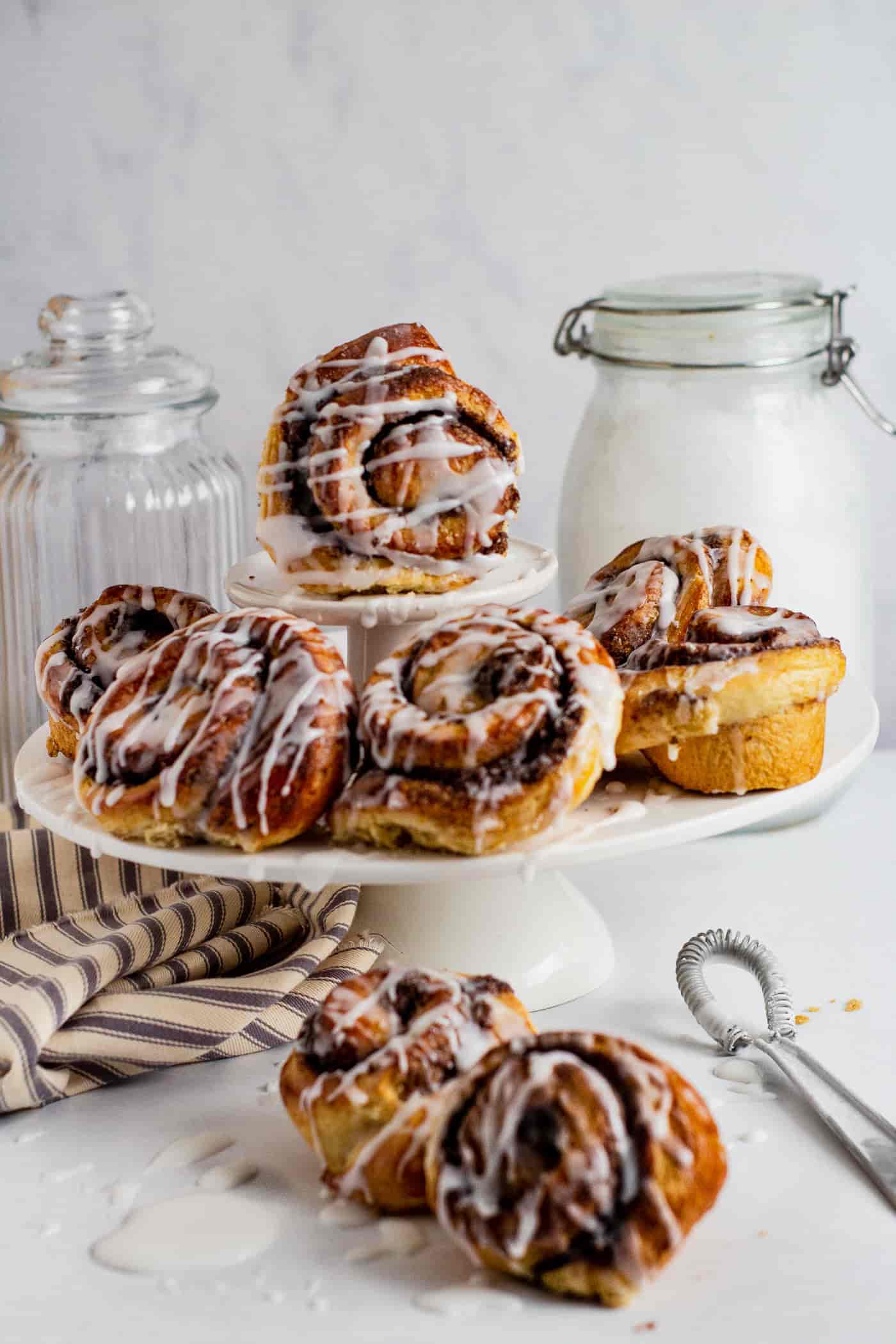 Cinnamon is without doubt my favourite spice and along with these Danish Cinnamon Rolls , this is my very favourite way of eating it. No spice speaks to me more.

The sight of these sugary beauties rising high above their muffin holes in the oven, makes my soul truly sing...no exaggeration I'm afraid.

These are so, so good I cannot express it enough. Soft, cinnamony and rich with buttery loveliness. One of my VERY favourite things to eat.

If I could be remembered for one bake it would be this recipe along with the aforementioned Danish version. I know that's two......greedy. But they both are INCREDIBLE.

400 grams (14.1 oz) Plain Flour - This produces a softer crumb than strong bread flour so is preferable but not essential. I have often made them with bread flour.

120 grams ( 4.25 oz) Unsalted Butter - You can use salted (not for the cinnamon paste or for brushing the buns though ) and just omit the ¼ tsp of salt in the ingredients. Baking Spread will not do here.

70 grams Sugar (2.5 oz) - I use caster or granulated for the bun mix and light brown sugar for the cinnamon paste.

150 mls Milk - I use semi skimmed because that is what I have in my fridge but full fat milk is fine too.

quarter of a tsp Salt - I use fine salt here.

14 grams (2 x 7 grams - 0.5 oz) Yeast - Instant dried yeast is my preference but fresh yeast is always fabulous to use and I think gives a better flavour, it's just not as easy to get hold of. But if using then double the weight of the dried yeast and add a bit more, so it will be about 17 grams of fresh yeast.

2 tbsp Milk - again semi skimmed as that is what is always in my fridge. You can use water instead.

How Do You Make Cinnamon Rolls From Scratch?

I bake mine individually in a large muffin tray. That way they all cook evenly rather than the outer edges catching and the inner ones still being under baked which was my experience when baking them all in one large baking tin.

I do tend to make bread and yeasty bun thingys in my food mixer with a dough hook. It is a bit of a sticky dough.

You can make it though by hand with a wooden spoon and large mixing bowl, it will just be harder work and require a good amount of kneading until it becomes easier to handle.

STEP 4 -ROLLING OUT THE DOUGH

STEP 5 - ROLLING AND CUTTING UP THE CINNAMON DOUGH

Can I Make Cinnamon Rolls The Day Before?

Yes you can and I often do.

Although the process can be time consuming I often make them the day before up until the second prove and put them in the fridge overnight covered ready to be pulled out an hour before I want to bake them.

I did this method for the cinnamon rolls in these photos. But I let them prove/puff up a bit before I put them in the fridge overnight so that it cut down the time in the morning before they were ready to go in the oven. My children wanted them for breakfast before school. Lucky little wotnots....

The cold from the fridge halts or significantly slows down the second prove/puffing up, so to save time the next day I let them prove a little before I put them in the fridge, they were fully proved by the morning so I simply put them somewhere warm to come up to temperature before baking.

Can I Freeze Cinnamon Rolls?

Yes you can. I make them as above until the second prove whereupon I place them on a baking tray in their individual swirls to freeze hard for about an hour.

Then I put them in freezer bags (I usually double the bags up so as to prevent freezer burn). They will freeze well for up to a month.

When you want them, take them out of the bags, place in a muffin tray and leave covered lightly with greased/oiled clingfilm (plastic wrap) for 10 hours or so to thaw and then prove. Overnight is the way I usually do it. Get up and check them early though. Definitely don't have a lie in!

Apply To Face Blog
These cinnamon rolls are so, so good I can't express it enough. They are at their absolute best warm from the oven. One of my VERY favourite things to eat. They are INCREDIBLE.
4.75 from 8 votes
Print Recipe Pin Recipe
Prep Time 19 mins
Cook Time 20 mins
Proving Time 1 hr 40 mins
Total Time 39 mins
Course Buns
Cuisine American
Servings 8
Calories 538 kcal

To make these the day before  you want to eat them you can make these up until the second prove begins. Cover them with oiled clingfilm and then leave in the fridge. Bring them out a couple of hours before you want to bake them to allow the dough to come up to room temperature and puff up for the second prove.

Keyword Cinnamon Rolls
Tried this recipe?Take a pic and tag @applytofaceblog on Instagram. I would so love to see them!

Do let me know how you got on in the comments below. I love a good old hairy chinwag.