These Halloween Brownies are really fun and super cute. Easy to assemble and packed full of chocolate they are always a real Halloween Party hit. 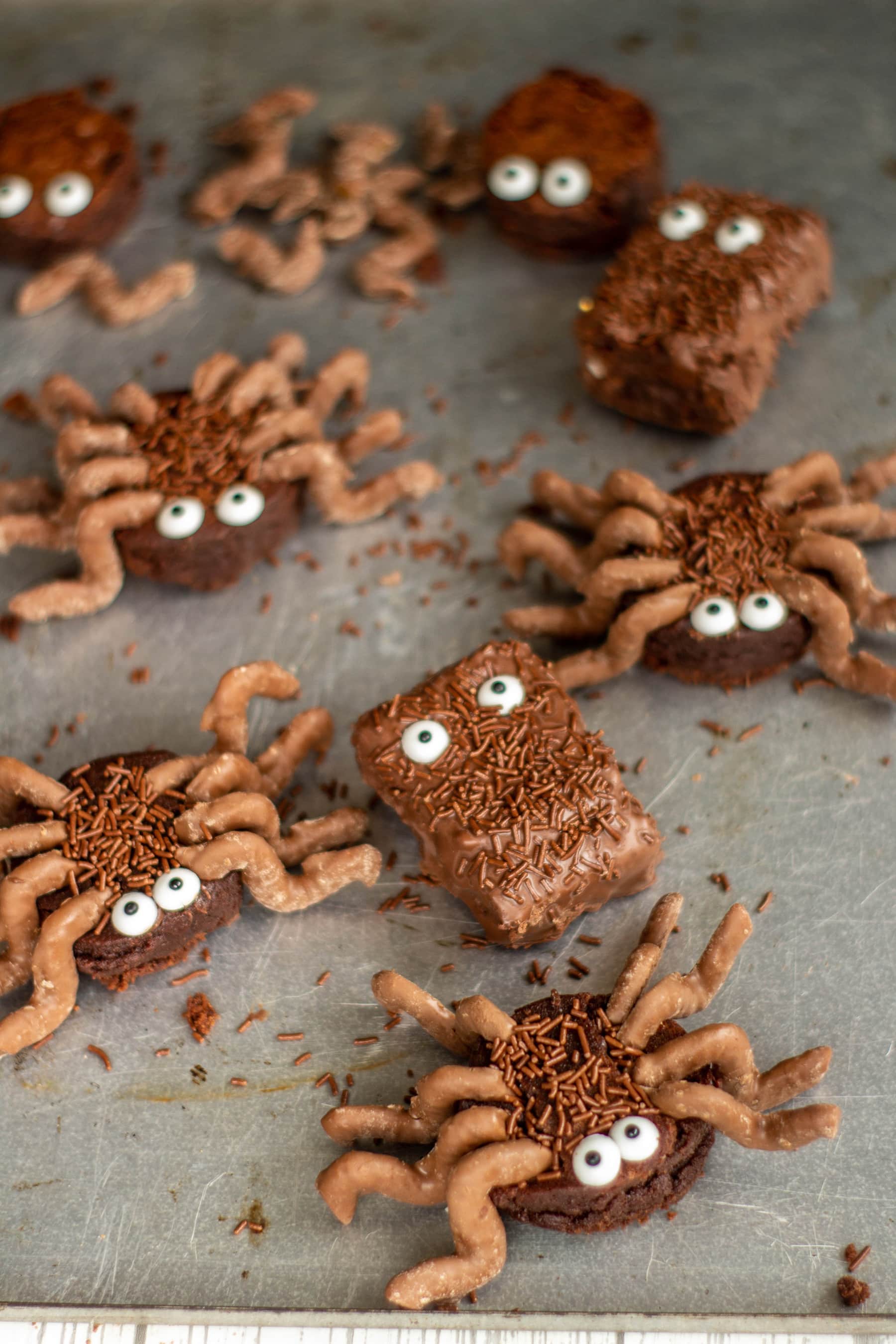 I love/am obsessed with Halloween. Don’t get me wrong I am not one of these tw.ts that gets dressed up. I leave that to the kids. However I adore all the stuff that comes with it, all the Halloween trimmings if you will. These Halloween Brownies stole my heart at first sight. Any excuse to ram my face with Brownies is obviously an incentive but the adorable cuteness of them just screamed out to me. I’m a sucker for a pair of candy eyes.

Stop all the clocks, cut off the telephone, Prevent the dog from barking with a juicy bone.

I ripped off my last HRT patch on Tuesday. That’s it I’m outta there.

A new very reliable study has been released suggesting that HRT carries a much higher risk of breast cancer than thought. Flying Flips…..

Here is the NHS link.…Too scary statistics for me.

I am bereft. God knows what I have in store for me now. Cold and clammy hormonal turkey I suspect. So far I have a permanent mofo headache to end all headaches and a rage that could take on a apoplectic Gordon Ramsey and wipe the floor with him…..easily.

I had a shower today and was about to get out when I suddenly wasn’t sure if I had actually washed my hair or not. I had no recollection of doing it, none at all. Stupid, stupid tw.t.

I washed it again/for the first time just in case and then got out, dried myself off, obviously avoiding looking in the full length mirror at all costs.

I got completely dressed and then lifted my hairdryer to begin to dry my pathetic few wisps of hair….it was still slick with conditioner for the love of god….

What a damn shame. God help my family…….

Last week I shared my Halloween Pizza Ideas with you. Super easy and again really just an assembly job. Also perfect to make with the kids.

These Brownie Spiders and Monsters will be on my Halloween Table alongside those goofy Pizzas. I’m going for the whole cute, spooky vibe with a smattering of blood and snot….just a smattering.

I love them because they are easy to make, full of chocolate and can be made ahead. I literally want almost all of the prep done before any hysterical kids are under my feet doing my head right in. Otherwise the blood may well be real.

Lets begin with the Monster Brownies. I make a batch of my Easy Chocolate Brownies and melt some milk chocolate. I do this in a bowl over a saucepan of simmering saucepan. I always melt milk chocolate like this rather than in the microwave. I find it burns more easily than dark chocolate. 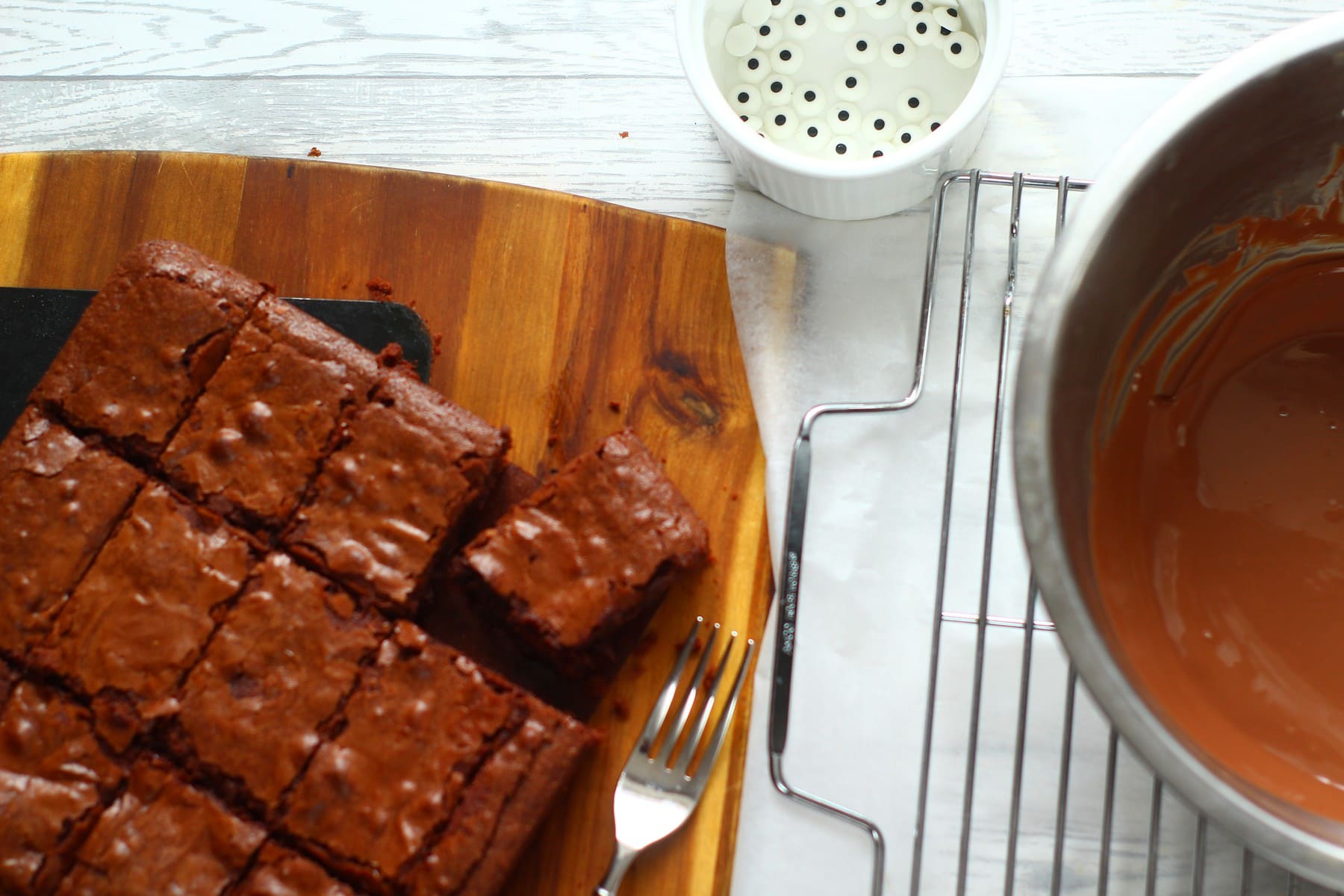 I let the brownies cool completely before coating in the melted chocolate and leaving to set on a wire rack. Before it sets I cover with chocolate sprinkles and place two candy eyes on the top of the brownie. So simples. 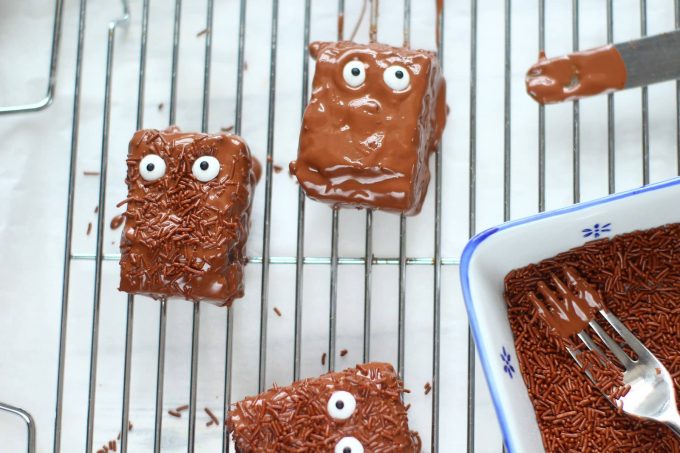 You can let the kids help you here if you have the patience of a saint and you are prepared to hose them down before they set foot anywhere else in the house.

Let them set and cover. I use a cake dome or tupperware. But they need their own space. I know how they feel….So don’t layer them.

The Brownie Spiders are perhaps my favourites but are slightly more fiddly. You can either use one batch for half and half of each monster/spider shapes or make one batch each.

These are super simple to make. Plus the fact that Cadbury Curly Wurly Squrlies are absolutely gorgeous. A chewy Cadbury caramel little squirl. I’m in Cadbury love all over again. And each Brownie Spider gives you eight of them….more than enough reason to make these beauties.

I use a cutter to cut out a round brownie body and then use a knife to make eight little dashes in the brownie so that I can push the squirls/legs in.

I do turn the brownie circles over so I get the soft side to put the legs into. It is much easier than dealing with a slightly crusty top.

I use a bit of melted chocolate or icing to fix the candy eyes on top. I then sprinkle over some chocolate sprinkles.

Just push the tops of the squirlies into the holes that you have made just enough to make them stand without leaning. Support the brownie as you do so.

Moving them is a careful business but if a leg falls off in transit just replace when it reaches it’s destination. Try to resist the overwhelming urge to snaffle it unless your child is not old enough to count….in that case eat at least three.

Halloween Brownie Chocolate Spiders and Monsters. Easy to put together and super cute. Great to get the kids involved with too.

Here are some more Halloween Recipes

Do let me know how you get on in the comments below. I do love a good old hairy chin wag.