This Apple Pie is the most amazing recipe with the best pastry crust imaginable. It is the pie love of my life. 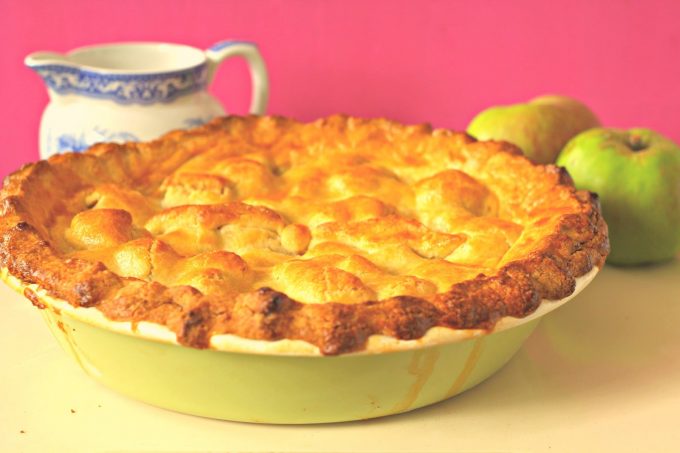 This recipe is my greatest culinary achievement to date. My quest to find the best apple pie pastry was a long one but the result was worth a lifetime of searching I kid you not. In my opinion this is the best apple pie recipe you will ever find. A most brazen statement but made with the most sincere intent. This deep dish apple pie is INCREDIBLE and have your diners asleep on the sofa in absolutely no time leaving you free for another slice. From me to you with Apple Pie love.

But first.......some emergency birthing in the footwell.....

I am a geriatric mum and when I first realised it I was genuinely horrified. I had no idea that any woman above 35 years of age is classed as such and boy did it hurt. I spent the whole of my pregnancy feeling a bit of an outcast and bizarrely a little ashamed.

There was though, one enormous silver lining in my aged cloud.......I could finally eat for two. All my life I had longed for this and it didn't disappoint.

I ate with the gay abandon of a death row inmate. Takeaways, MacDonalds, Pasties and Pies, I cast off any moderation and ate like Augustus Gloop at every opportunity.

Obviously the result in both my pregnancies was vast weight gain. Think Bubbles from Little Britain without the accent and joie de vivre but lots more pubic hair (I couldn't get to it).

All good things must come to an end and my stuffing of face came to a stop with the birth of my first child. It was pretty hardcore and try as I might I cannot find much humour, as it left me traumatised and ruptured in ways that only sheep farmers and the well educated are aware of.

However my second birth was the stuff of the easy peasy and empowered me to such an extent as to wipe out completely the emotional trauma of the first. Life can have a wonderful way of balancing the scales (excuse the pun), if we are able to be open to it, just look at Rick Astley.

So with my second child I awoke at 5.30 a.m to a pain that was sharp and bright and I immediately knew what had begun. I was now an accomplished Birther and Bertha of course and there was no freaking out or panicked phone calls but a calm bath that I took alone before anyone else was awake.

I would /should have played carefully chosen music and lit meditative aromatherapy candles but I couldn't really be arsed.........

I hacked at my legs with a Bic lifting them high above my hippopotamus belly in a determined attempt to reach the carpet that covered my shins. I also took  a few futile swipes at my nether regions but  was completely unable to establish a visual so relied  solely upon a fingertip search and a few literal stabs in the dark.

Obviously my dignity was completely caught up in said grooming rituals and coordinated underwear which I then took half an hour to locate as they were my only pair and of course elusive.

By that time my husband had persuaded me to embark to the local maternity hospital and the on duty midwife promptly laughed  hard at our keenness and advised we wait it out at home.

Silly b...h I thought but waddled back to the car obediently.

Within an hour of being at home I knew things were moving fast but unusually and bizarrely found it difficult to speak and as my husband was asleep on the sofa, it took a while to summon aid.

I tried to tell him that the baby was coming but true to our usual conversations I knew nothing, was being ridiculous, and he was an Obstretician.

To his credit he drove like a maniac but to no avail and before we had reached the hospital I felt something large push itself into the gusset of my colour coordinated underwear.

I told my husband yet again that the baby was coming and that something was now in my pants but such was his expansive  obstetrical knowledge by this time, that he felt sure I was again being ridiculous. How I laughed.............

He screeched up to the doors of the hospital and ran round to open my door, as he did so I glamorously lowered my trousers and he became aware of the situation at hand.

He ran off swearing profusely to summon help and in something akin to Casualty/Baywatch about 10 medical staff began sprinting towards me clutching medical supplies and I hoped some biscuits.

Everything was now in slow motion as I sat there helplessly with my trousers  still around my ankles and my baby's head between my thighs awaiting the Cavalry.

But I also knew that I didn't need them, her shoulders were turning, there would be  one more contraction and she would be out, the hard part was over and that made me feel pretty sh.t hot.

I had practically delivered her myself despite my other half's encyclopedic birthing knowledge and supportive bedside manner......

So she was born without much further ado in the footwell of our cream carpeted Audi A3 and whisked quickly away into the warmth of the hospital with hubby following close behind.

By now it was just myself and a few disinterested stragglers left behind and one of them approached my side of the car with a wheelchair.

Marvellous you might think, here comes my ride but this straggler was a young and attractive male and I was sporting a killer look........... naked below the waist, apart from socks and shoes (nice) with the umbilical cord hanging, clamp still attached........and as he indicated that I was to rise from the car and sidle over to him and said wheelchair, I became deeply struck with complete mortification.

The wheelchair was positioned quite a way from the car due to our erratic parking position after having mounting the pavement next to two bollards. So it quickly became obvious that there was no escape and nothing else to do but suck it up or ask for a piggy back (can you imagine?).

Luckily it was a Sunday and the usual smokers were absent, a mixed blessing as I could have done with a quick drag.

Two nurses attempted to shield my modesty with a sheet but my wheelchair driver had full visual access, the poor desperate fellow.

He held my chariot steady and waited as I began my slow shuffle of shame, with clamp swinging off the umbilical cord and banging against my thighs and a huge hippopotamus jelly belly doing the mambo, I advanced in a wide legged waddle that seemed to last an excruciating  eternity.

When at last I reached Adonis and his chair, I lowered myself and dangly bits carefully  into it, overcome that my expose was finally over and hoped dearly that he had access to Counselling ..............thank God I had shaved my legs hey?

My absolute favourite during my pregnancy gorging was Apple Pie and Cream. It became a small obsession with me to find a recipe that ticked all my boxes.

I had a thing for the pastry that was used for the cheap supermarket pies that you can buy freshly baked but due to their price I assumed they must be full of cheap and nasty ingredients.

I tried a great many recipes in my avid search and had all but lost hope when I came across this wonderful recipe by Louise Wilcox in The Aga Bible.

I have adapted it to suit my cravings and am thrilled to be able to share this seriously incredible recipe. It has pastry that doesn't even try to be flaky,  it is the manual labourer of the pastry world and delivers a pie that is filling and completely up to the job in a way that only a 24hr emergency plumber can be when your pipes have burst at 2 a.m and your upstairs bathroom is flooding.

It has a filling that is in perfect parts sweet and tart with the cinnamon bringing the whole thing together into a dessert of the stupendous and deeply satisfying. This Apple Pie is the Love Pie of my life.

This is a big Apple Pie and as such it does require your full attention at times especially towards the end of the baking time to make sure the pastry doesn't catch at the edges. It is so worth it though. This is a Pie that memories are made with....

Keyword Apple Pie
Tried this recipe?Take a pic and tag @applytofaceblog on Instagram. I would so love to see them!

Do let me know how you got on making this Apple Pie in the comments below . I love a hairy chin wag.