Like most things, I have come late in life to the Slow Cooker (Crock Pot) but I am absolutely revelling in it’s many fabulous foodie facets. This amazing recipe for a Slow Cooker Beef Joint has knocked me bandy.

What Cut Of Beef Is Best For Slow Cooker Roast Beef?

Brisket is my favorite cut of beef and a real beef taste sensation because of the fat running through it. The gravy is sensational and if there is too much fat for the gravy left in the juices after cooking then I will spoon some of it off and keep it in a mug in the fridge and use for the roast potatoes or to add in my Slow Cooker Beef Casserole at another time. I love Brisket as Roast Beef in the oven and also here in the Slow Cooker.

I do find it difficult to find a large Brisket joint without visiting the butcher though. A  point to note is that Brisket needs usually 9 hours on Low in the Slow Cooker and it cannot be cooked for 4-5 hours on High as it will still be tough. 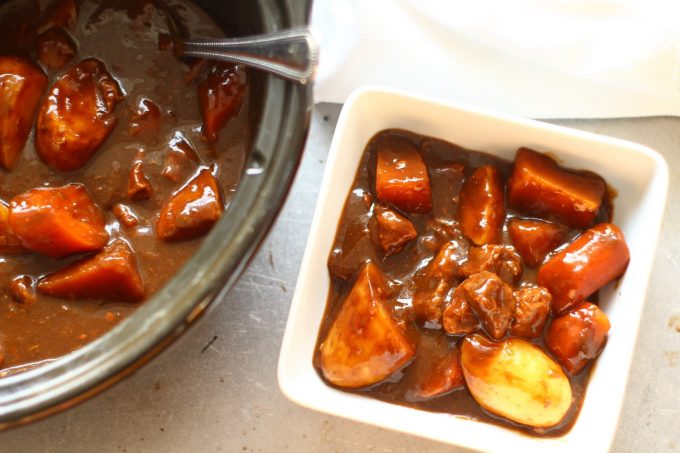 I used Silverside, or Rump Roast if you’re in the U.S, in these photos for the recipe, as it was on an half price offer and it was absolutely delicious. So good in fact that I promptly went out and bought another of these joints to freeze for next time. It is a joint that is easily available in supermarkets this size and loves long and slow cooking.

Topside is another fabulous choice and one that is often on offer at the supermarkets. I like to buy when discounted and freeze. It is a great choice for the Slow Cooker as it loves to be cooked long and slow with big beefy flavours.

Any of the above joints are delicious and work really well in the slow cooker. This recipe is super versatile and that’s the point. You’re so Sunday welcome.

Another point is oftentimes  joints of beef are just labelled Roasting Joints in supermarkets. It doesn’t even say what joint it is. So don’t sweat it Susan. Grab and go. I really often do. 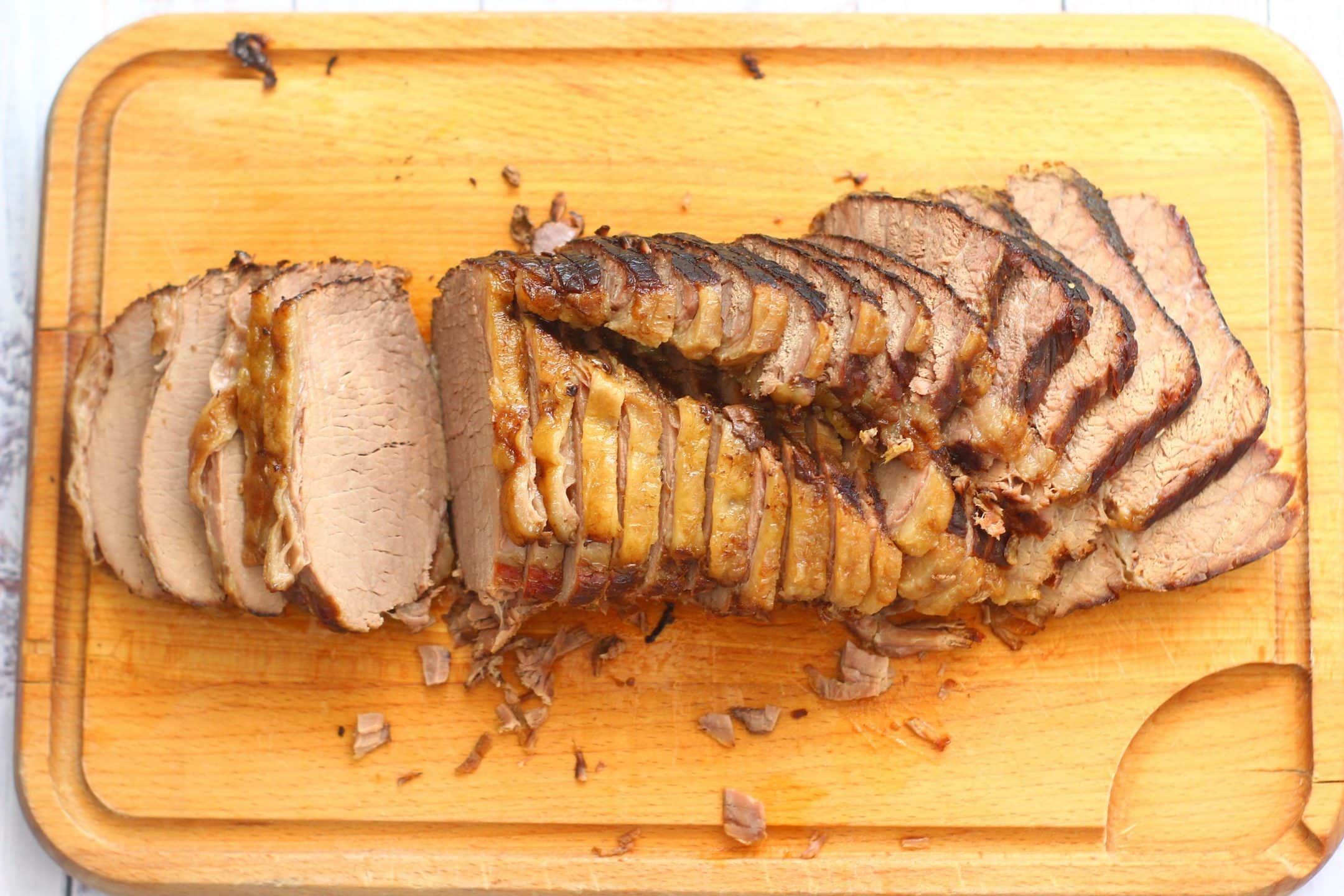 Here is a great article on the different cuts of beef. Scroll down for the British Guide.

How To Cook Slow Cooker Roast Beef and Gravy

Basically you have 2 options. Cook for 4/5 hours on High or 7/8 hours on Low (9 hours Low for Brisket). Use your time constraints to make your choice.

I personally prefer to cook this for 7/9 hours rather than 4 /5 hours as it produces softer meat but if you are planning on having it at noon then you would probably need to get up super early or put it in last thing at night and get up early to switch it off which kind of ruins the whole lazy vibe we’ve got going on in the first place.

So you could cook it the day before and reheat. In fact that is the way  I usually go, as if you leave it to go cold and then wrap it up and put it in the fridge, it is super easy to slice the next day and does not crumble at all. Something that can sometimes happen if you cook it for the 8 hours (9 hours for Brisket).

I then put the slices back in the slow cooker an hour before I need it hot and cover with gravy and reheat it on high until it is piping hot. So damn easy. I highly recommend this method.

The other alternative is to simply have a later lunch or even supper. Or, as mentioned above, cook for 4/5 hours on High (not Brisket).

I suggest you use Topside when cooking it for 4-5 hours on High as it is not as lean as Silverside and therefore generally requires less cooking time to tenderise.

I would still allow for more time if your joint is on the large size and I do find that generally the longer you can give it the better.

Can You Overcook Beef In The Slow Cooker?

If you have enough liquid in there and the heat is on Low then there is some wiggle room here. It all depends on the amount of fat and collagen running through the meat. Brisket is much more forgiving than a leaner cut such as Silverside. But that said, I would try to stick to the advised cooking times in your recipe until you are experienced in cooking it.

What Do I Serve Slow Cooker Beef Joint With?

I have served it as a Sunday Lunch Roast Beef here and this is in fact the way I usually always cook my Sunday Lunch Beef. Low on effort and washing up as well as super easy peasy reheating options.

I serve it with roast potatoes, vegetables and yorkshire puddings. My Cauliflower Cheese is always a hit here and if I’m thinking a bit swish then I make them with my Dauphinoise Potatoes rather than roasties.

You could also slice it thickly for serious Roast Beef Rolls with caramelised onions and mustard or horseradish and rocket served with chunky chips and coleslaw.

I do something similar with my Brisket Buns here. In fact it’s one of my favourite ways to easily feed a crowd. It is an outstanding recipe.

I serve it in big dirty baps with spoonfuls of gravy and have done so for many a standing ovation.

You could also serve this beef joint with creamy mash, lots of gravy and vegetables.

It is also really great to have it just sat cold and covered in the fridge for salads and sandwiches at the drop of a beefy hat.

The children go bonkers for warm roast beef sandwiches and ketchup and one of my husband’s all time favourites is cold roast beef and chips.

Beef brownie points all round.

I’m afraid I DON’T like my beef gravy to have anything else other than beef in it but I do understand that most do. So I have added a couple of carrots, celery and an onion in the bottom of the slow cooker here for the beef to hunker down on and flavour the gravy. But you don’t have to either.

Feel free to add your favourite flavours. Jamie Oliver would have bay leaves and rosemary tucked in there I’m sure.

Beef Joint in the Slow Cooker

This recipe for Slow Cooker Beef Joint delivers on all fronts. Not only is it super delicious it is super easy too. The options are endless.

This feeds four with left overs or six in the one sitting as a meal. Obviously it will go a little further served in rolls and sandwiches.

If you do use for rolls and sandwiches then keep the gravy in the fridge for sausages and mash, cottage pie etc.

A smaller or bigger piece of meat may require shorter or longer cooking times although not significantly. The best test is to plunge a fork in to feel if it is soft yet. The meat should be 71 C. It can become crumbly so if it does thick slices are the way to serve.

I like to make it the day before and allow to go cold before wrapping up and putting in the fridge. It slices very well then.

Here is another incredibly easy and delicious slow cooker recipe.