This Slow Cooker Gammon Joint is super easy and delicious. It delivers moist and tender ham every time. What’s more it’s as good hot as it is cold. A huge family favourite. 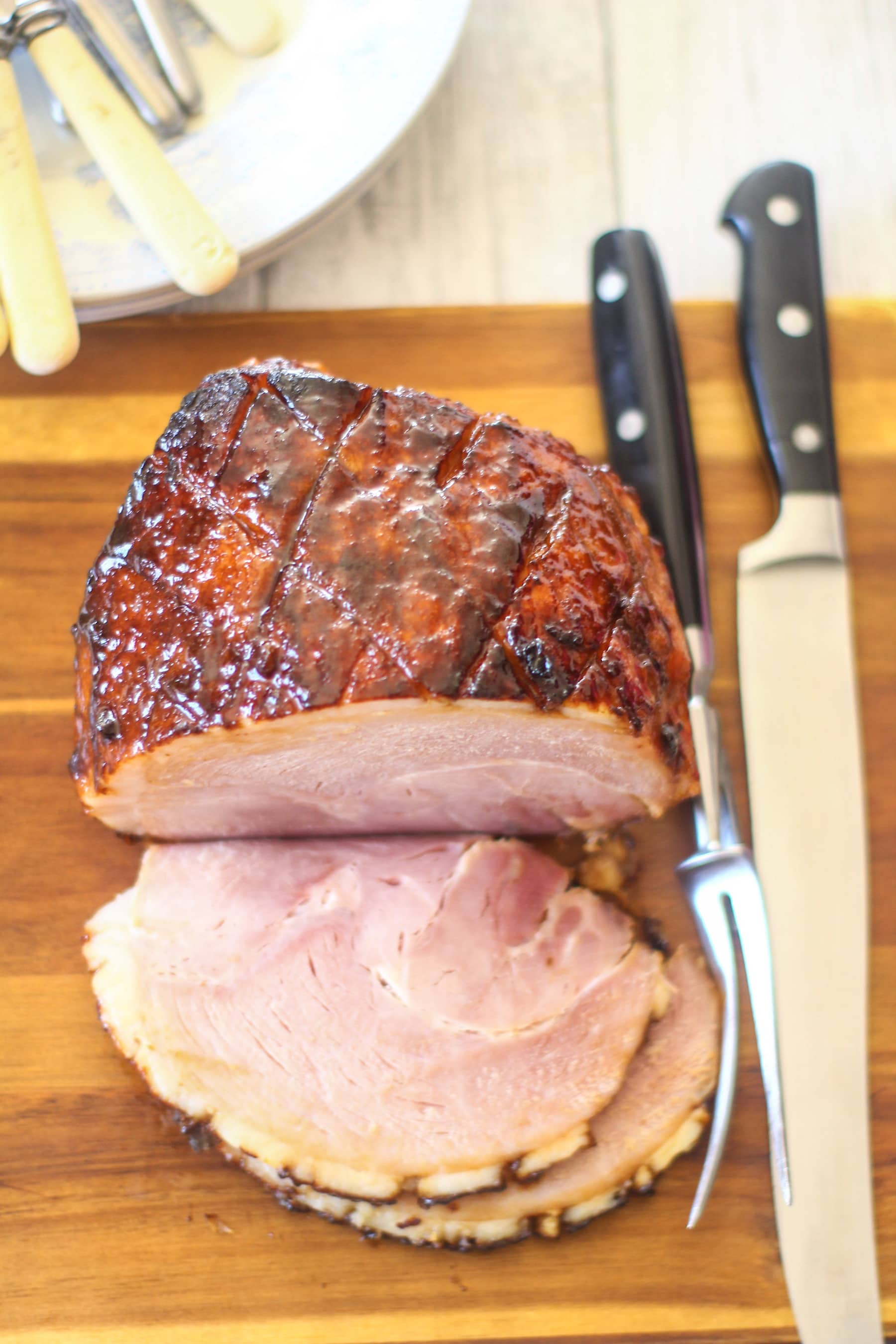 My family as a whole absolutely love a Ham or Gammon Joint and that is a bit of a minor miracle in itself. But one that I am most grateful for….always.

They love it roasted this way as Family Roast Gammon, and they love this deliciously tender slow cooked gammon, done in the slow cooker( or crock pot if you’re American). Both methods are SO easy it feels just wrong but my job is to spread the glorious word so I am here with photos and everything….

Slow Cooking a Gammon joint is simplicity itself. I need to be clear here. You can do nothing and cook it without any liquid in the slow cooker / crock pot, I often do. It still comes out moist and tender.

Just pop it in there and cook on high for 4-5 hours for about a 1.5 kg size, less if it is smaller. The cooked internal temperature for gammon or ham is 71 C.

So you can do no more than put it in your slow cooker and flick that switch and five or so hours later you have something delicious. That is exactly how I roll a lot of the time.

But if you want something a tiny bit more fancy pants then I’m your girl. Moist and delicious with a mustard glaze this recipe is a perfect choice for Christmas or a special occasion. I also love serving it for Sunday lunch in the colder months.

I use both smoked and unsmoked gammon joints. It is entirely down to your preference. I think I do prefer smoked personally. There is that deeper flavour there that I really, really love pairing with cheesy sides.

Here is an explanation of what and where Gammon comes from. 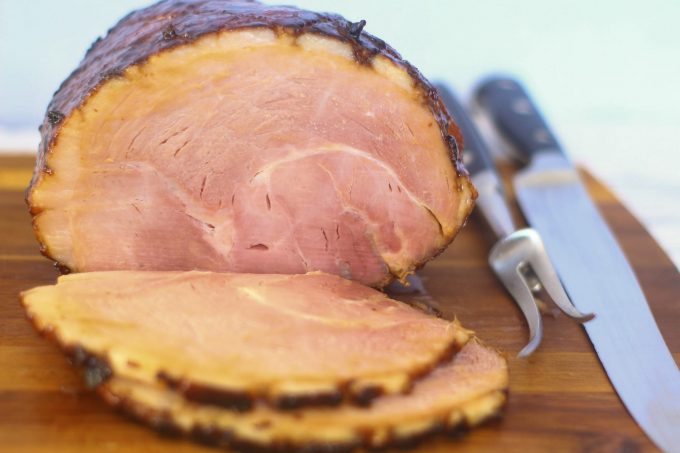 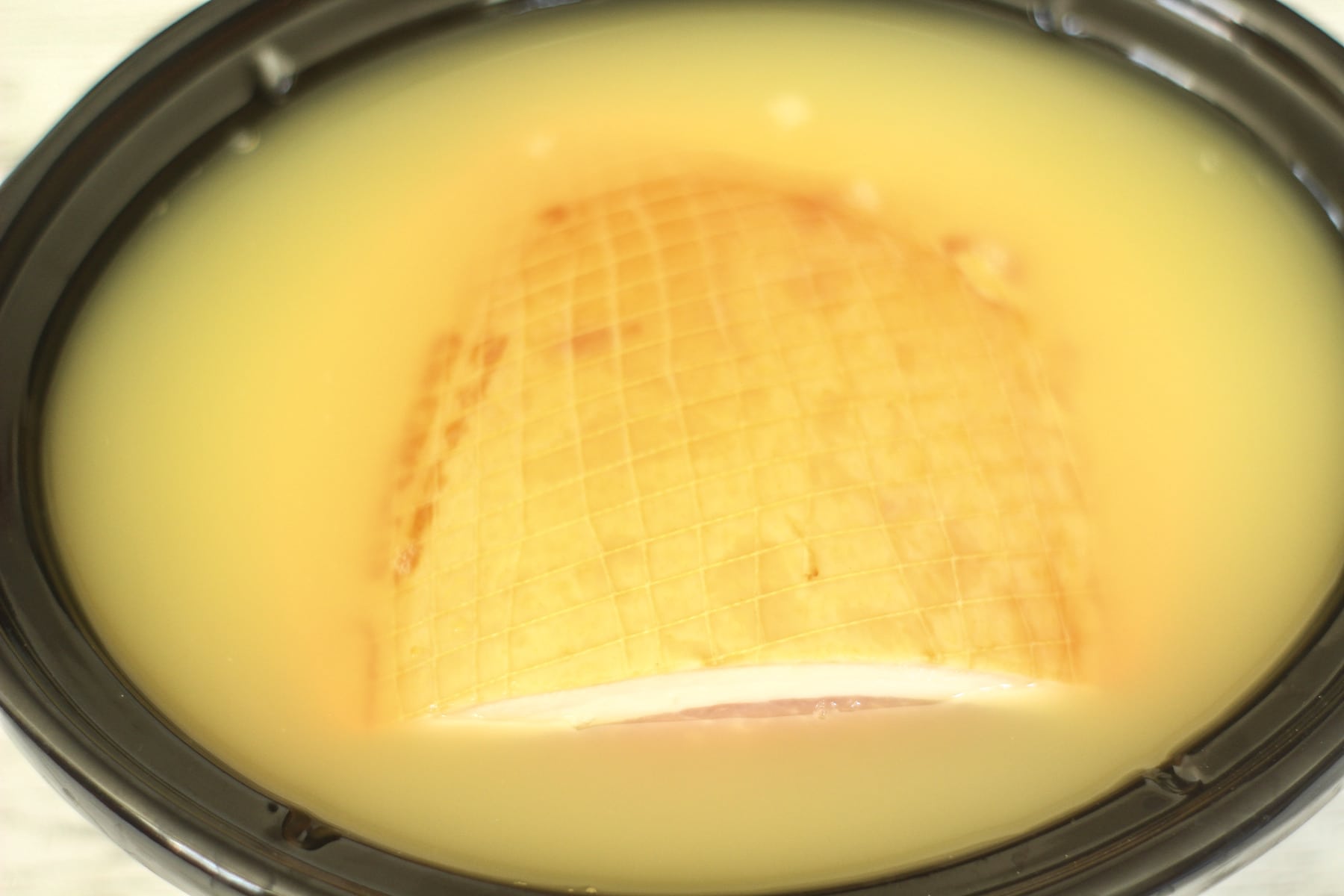 How To Cook Gammon Joint In Slow Cooker

Doing it this way is great because it is one less thing to do if I am entertaining a crowd the next day and have a lot of cooking to do.

I love to get ahead for these occasions. It helps to avoid weeping (me).

You can then reheat it sliced in the slow cooker on high until piping hot or serve it cold for salads, buffets or ham, egg and chips!

I do sometimes use a glaze when I cook in the slow cooker. It is easy to do and improves the look of the gammon. It can look a little gray on the outside after it’s slow cooker bath for 4 hours or so.

Scored and ready for the glaze

Ready for the oven

It is ready to serve beautifully burnished just like this or you can put it back in the slow cooker to keep warm until you need it.

Sometimes I get ahead by carving it and carefully putting it back in the slow cooker an hour or so before I need it. A big part of me likes to show it off though so I usually leave it till everyone’s had a peek and made suitable noises.

What To Serve With Gammon

I mainly serve this as a weekend meal, be that Saturday or Sunday Lunch. I love to serve it with my Cauliflower Cheese and Roast Potatoes. I make the sauce in the cauliflower cheese thinner so it acts like a gravy. I add an extra 300 mls of milk and an extra 50 grams of cheese to the sauce in the saucepan before baking. I serve some carrots too. I think their sweetness is delicious with the salty ham.

Another combination that I also love to serve it with is Buttered Red Cabbage in the winter months especially around Christmas. The pairing is divine. No Cauliflower Cheese this time but again Roasties or maybe Dauphinoise Potatoes.

I always put out some Redcurrant Jelly for people to help themselves to. The sweetness of the jelly is so good with it. It’s a must for me.

If serving this cold then of course the obvious Ham, Egg and Chips is a real crowd pleaser. I often make it this way as an easy midweek meal having cooked the ham at the weekend. You could simply serve alongside some delicious Potato Salad. I do also love to serve it as part of a buffet table for a get together or, of course, Christmas. Nothing could be easier.

I do sometimes use any leftovers for Quiche Lorraine instead of the bacon lardons or in my Ham and Cheese Sliders instead of sandwich ham.

Do let me know how you got on in the comments below. I love a good old hairy chinwag.