Slow Cooker Roast Chicken is something that I cook almost every week. Cooking a whole chicken in a slow cooker is about as simple as it gets and I do like to keep it exactly that. Easy with a capital E. Tender and juicy chicken every time tasting exactly as if I had roasted it in the oven. 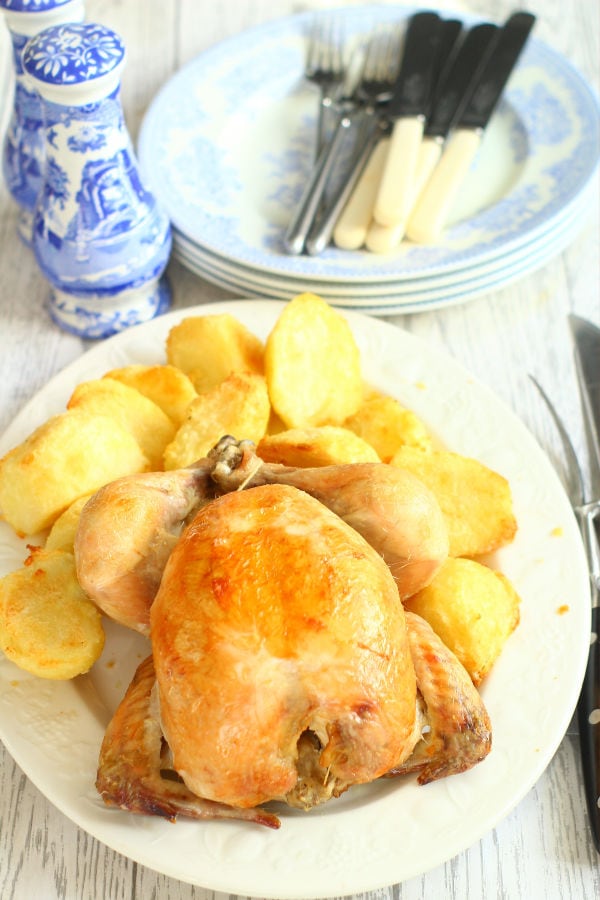 I am quite a bit in love with my slow cooker. It’s not just a teenage crush either. It is such a genius bit of equipment and I would be lost without it. I feel like I almost have my own little kitchen helper. It frees you up so much time and washing up. And how damn cheap are they???

At Christmas I always have Slow Cooker Roast Beef and Slow Cooker Gammon sitting there in the fridge awaiting passers by (me). I also usually have a whole Chicken or two and my hunched and rabid silhouette is often to be made out silohuetted and twerking in the back light of the fridge.

All of the above are cooked in my slow cooker. I love how it cooks meat long and slow. Any meat, even chicken, cooked this way finds it hard to be anything other than fabulously tender and juicy.

The amount of steam produced keeps everything super moist and even the stringiest of birds can’t resist melting more than a little. I should try it some time…

My Slow Cooker Spaghetti Bolognese, Slow Cooker Chicken Curry and Slow Cooker Sausage Casserole are the workhorse’s of my midweek meals in the slow cooker and so is this whole chicken recipe. I make it time and time again sometimes with little twists but mostly plain and simple, just as it comes.

But first…..some half-term holiday angst……feel free to scroll past the story to the recipe below if you’re feeling hungry.

Since the painful removal of my HRT patches I have been left adrift on a sea of wakefulness. For the love of God I would give Margaret Thatcher a run for her old money.

I awake in the very early hours unable to catch even one more wink. I awake at any time between 2-3 a.m and whilst I am not capable of much at that moment I am definitely not capable of sleep.

The truth is I can’t be ar.ed….. I’m still exhausted although excruciatingly wide awake. What a middle aged liberty.

Why is it that the peace of mind required for sleep is so elusive to the perimenopausal one? What primitive point does it serve?

Back in the day when we lived in caves did it flush out the old women in a survival of the fittest? Did the older cave women become forgetful and fuzzy through lack of sleep and brain fog and forget which cave was theirs or why they were they were even there in the first place?

Starving to death alone and TERRIBLY/INCREDIBLY/FEROCIOUSLY annoyed about it.

This chicken recipe is such a boon. It is in those moments of angry wakefulness that I do head for the fridge and when I have a whole roast chicken in there or even the leftovers of one, I actually do find some satisfying solace.

This recipe is super versatile and the one I now always use. Cleaning the oven after roasting a chicken is a job I do not miss!

How to Roast a Chicken in a Slow Cooker

It is as easy as it gets. It’s really not a recipe at all just a method and a small one at that. Generally speaking it is 4-5 hours on high and 6-8 hours on low. This recipe is hugely forgiving too, an hour or so extra and it matters not. Slow Cookers flipping rock!

You can add twists to it each time though to suit your family and the guests expected at your table. Here are a few of mine.

I often use a Spice Rub. I have to be honest and admit that I don’t make my own but use a heaped tbsp of fajita spices.

I then serve the chicken carved in wraps/tortillas with roasted peppers (also cooked in fajita spice), sour cream and grated cheese.

Any leftovers make a great salad.

I simply omit the vegetables below and add about 6 whole unpeeled garlic cloves into the bowl with the chicken.

At the end of the cooking time I put 100 mls of white wine and 250 mls of chicken stock into a saucepan and transfer the gravy in there too. I squeeze out the soft insides of the garlic cloves into the gravy. I spoon off as much of the chicken fat as I can but leave a little behind for flavour.

I bring the gravy to a gentle bubble and then add a cornflour slurry (2 tbsps cornflour and 4 tbsps cold water) to thicken the gravy. Mixin it all together thoroughly. I allow to simmer for a few minutes.

I love to serve this with mashed potatoes, green vegetables and corn on the cob. Heavenly.

This is a more Sunday Roast recipe but I still make it mid week simply because it is so damn easy. For a family of four I use a medium chicken -1.3 – 1.5 kg. Use a larger one for 6 people but depending on the size of your slow cooker you may not be able to fit much veg in. The bigger the bird the longer it will take to cook too. 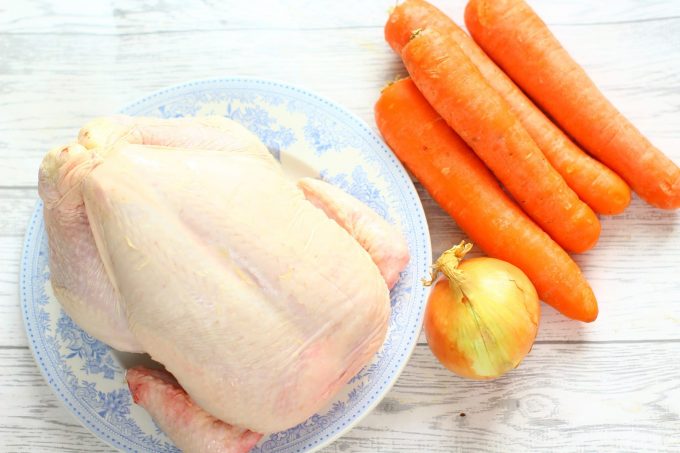 And so to a small point. I have made this recipe with carrots and onions and without. I prefer it without as I don’t like to flavour the gravy with anything other than chicken.

But I concede that many of you do so feel free to put 2 or 3 whole carrots and an onion in there. Ideally they go on the bottom of the slow cooker and the chicken on top. 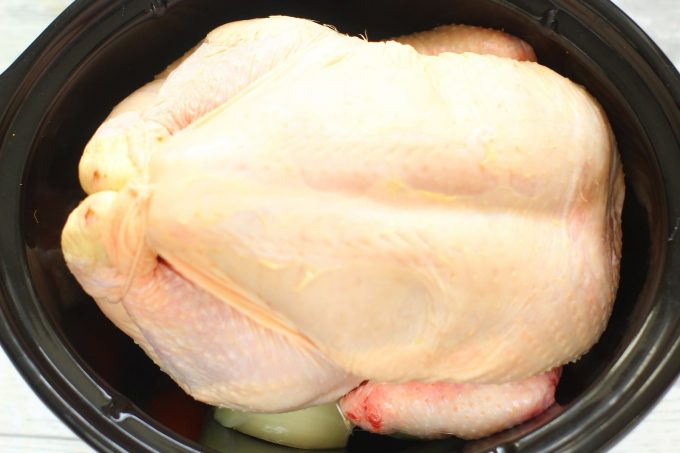 If you make it without the veg then ball up 3 pieces of silver foil and put them on the bottom of the pot to keep the chicken off the bottom.

I season the chicken and then cook it for 4-5 hours on high. Use a meat thermometer to check it has reached 75 Celsius/165 Fahrenheit. Test the thickest part of the thigh without touching bone.

I also check that the juices running from the bird are clear. I tip the bird up so that they run from the cavity and all gather in the slow cooker bowl.

If all is good and ready then I remove the chicken and put it under a hot grill after brushing it quickly with olive oil. Otherwise the chicken looks a little bit grey for the table. I wish I could burnish so damn easily.

I put it close to the grill for about 5/7 minutes until browned. Set it aside to rest for 15 minutes. I cover mine loosely with a sheet of tin foil. 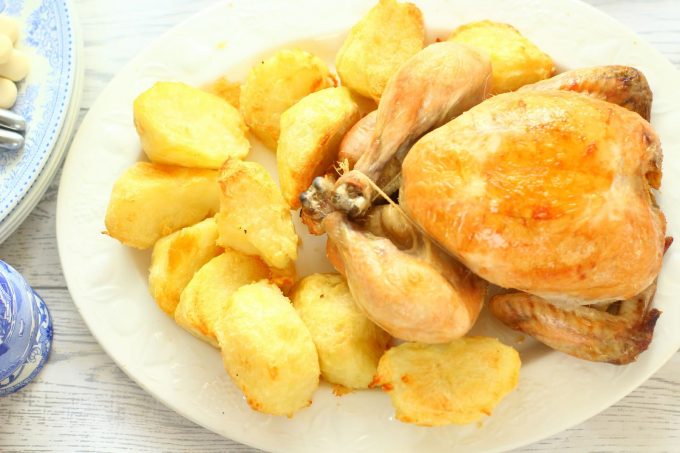 When serving this chicken as a traditional roast I like to make some gravy from the juices. I spoon off as much fat as I can be bothered to. Bearing in mind that you want a little in there for flavour.

I then pour in 250 mls of double strength chicken stock. I mean that you make the 250 mls with the ratio of stock cube/pot for 500 mls.

If you make your own chicken stock then flipping well done and use 250 mls of it.

I use a corn flour slurry to thicken the gravy. I use 2 tbsps of corn flour and mix 4 tbsps of cold water into it. Tip it in, stir it well and wait for it to start to bubble and thicken. Season to taste.

I serve it as a Sunday Roast with all the trimmings and in the midweek usually with mashed potatoes and corn on the cob.

Ways To Use Roast Chicken Leftovers

Obviously we have the above traditional Roast Chicken that is perfect for your Sunday Roast with all the sides but I also use the leftovers or indeed the whole chicken in lots of other ways.

I use it for great Salads such as my Easy Thai Salad or Easy Chicken Caesar Salad. 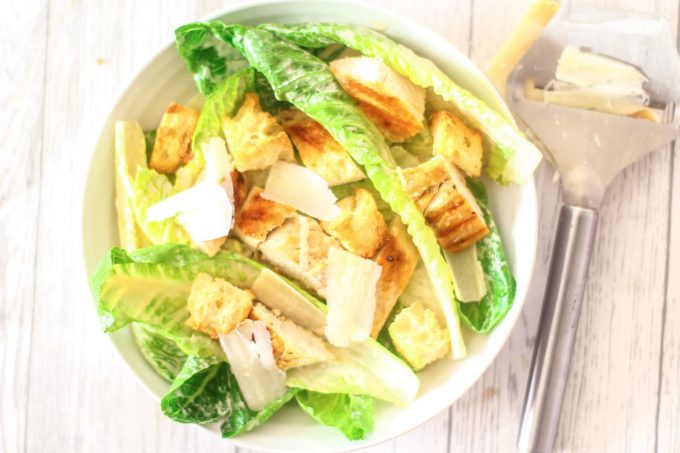 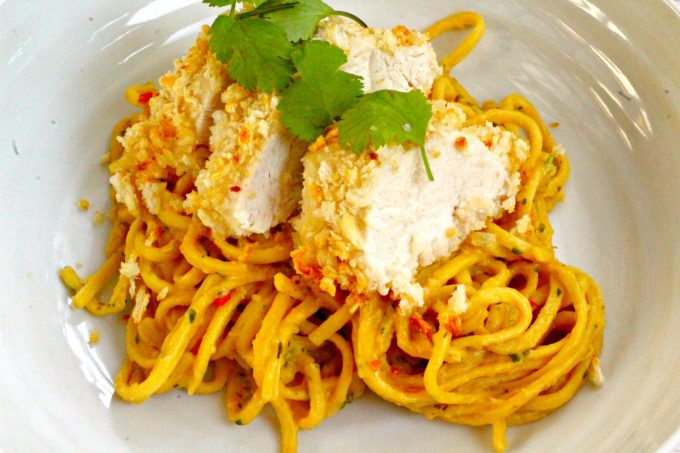 I use it for my Easy Butter Chicken too, throwing it all in after the sauce is made. 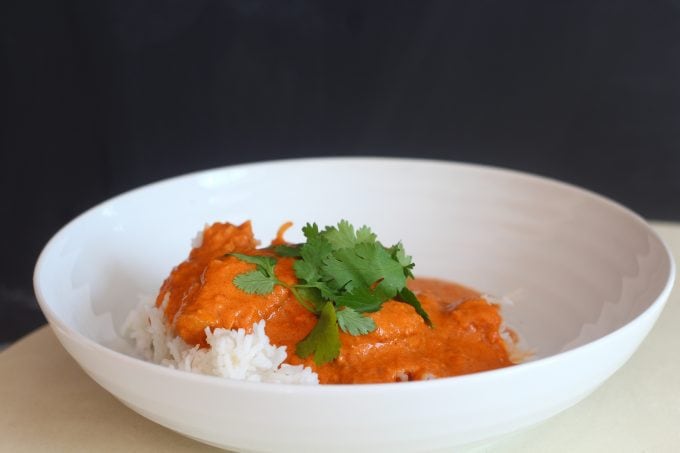 I stick it in sandwiches and rolls and, as previously confessed, eat strips of it soused in salad cream secretly from the fridge.

Let’s face it this is about as versatile as it gets. I can thoughtlessly chuck a chicken in and then make my mind up how I’m going to run with it later when I have time to think or can remember how many I have for dinner or why I came into the kitchen in the first place..

Dress it up or down, it’s always good. 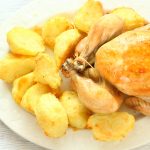 Super easy slow cooker roast chicken that produces tender and juicy roast chicken every time. As perfect for midweek meals as it is for a Sunday Roast.

Do let me know and comment below what you think and how you got on with it. I LOVE a good hairy chinwag- 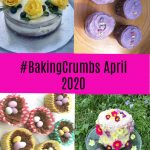 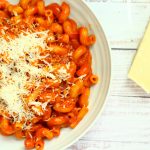 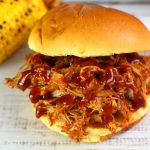